Melville (aka ''Applecross'') is a good spot for beginners and those seeking flat water. Although the winds can be quite gusty, the shallow water offers safety for those not independent just yet. This location is easily accessible from Perth. Two schools operate in this area: Soulkite and Seabreeze kitesurfing school. 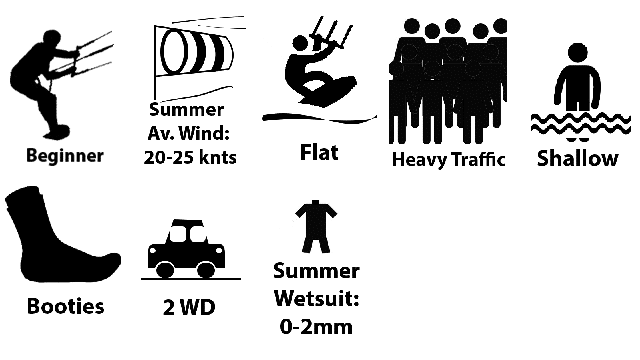 
SSW: The most common afternoon wind direction during the summer months in Perth (October-April). This wind direction allows you to get away from the shore but also come back to shore easily.


SW: A true South-West breeze happens on occasions during the summer months. This wind direction is ideal for this location.


WSW, W, WNW, NW, NNW, N: These winds will blow predominantly during winter (May-September) and are not recommended for beginners. Winter winds are usually generated by storm fronts and can be unpredictable, gusty and on-shore.

- Launch and land within the 3 yellow buoys

- Keep the kite over the water to avoid accidents

- Stay away from buoys

- Keep 200m distance from shore once in the water

- 2 kitesurfing schools operating from this location

- No kitesurfing on onshore winds

- Do not park on the grass

- Close to the city

- High risk of accident on land