Leighton beach is a great spot for those wanting to learn to ride waves. It works best in Sea Breezes (S, SSW, SW) during the summer months (October-April). The beach can get very crowded with beach goers during weekends. Two schools operate at this location: WA Kitesurfing Academy and Elemental Kiteboarding. The wind can be very gusty on the beach and close to the shore, especially if the wind is due South or SSW. Leighton beach is also well known as the finish line for the annual Lighthouse to Leighton kitesurfing race event. 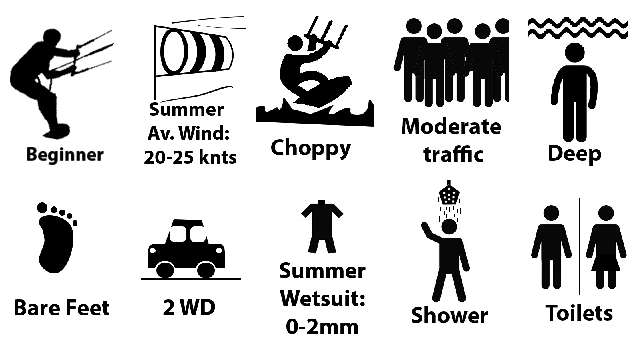 S: A common afternoon wind direction especially during the hottest parts of summer (January-February). Due South winds can get very gusty especially on the beach and close to shore due to wind passing through the Fremantle Port. On very hot summer days, due South winds are often weaker in strength and may arrive later in the afternoon.


SSW: The most common afternoon wind direction during the summer months in Perth (October-April). This wind direction allows you to get away from the shore but also come back to shore easily. SSW winds can also be gusty on the beach and close to the shore.


SW: A true South-West breeze happens on occasions during the summer months. This wind direction is ideal for this location.


WSW, W, WNW, NW, NNW, N: These winds will blow predominantly during winter (May-September) and are not recommended for beginners. Winter winds are usually generated by storm fronts and can be unpredictable, gusty and on-shore.

- Do not setup, launch/land or fly kites in the dog exercise area

- Do not setup, launch/land or fly kites in front of the Fremantle Surf Life Saving Club

- Do not kitesurf inside the designated (flagged) swimming area.

- Keep a safe distance from other beach users / kids

- Can get very crowded with beach goers

- Waves can be challenging if you are learning

- Thieves operate in the car parks